What Should Parents Expect After Circumcision Surgery? 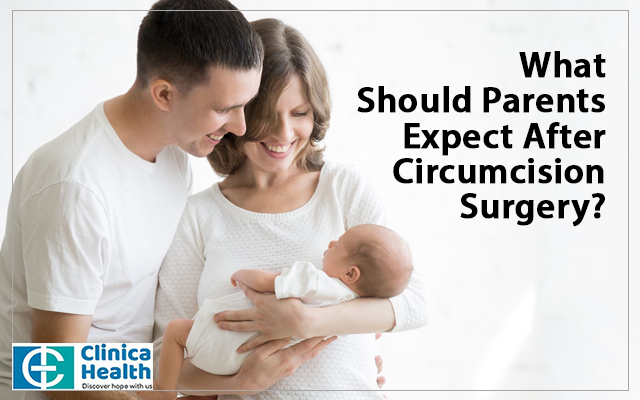 Following circumcision, the tip of the penis may appear raw or yellowish. If a bandage is present, it should be replaced after each diaper change to reduce the risk of infection.

Apply petroleum jelly to the bandage to prevent it from sticking. Occasionally, a plastic ring is substituted for a bandage. This should drop off within five to eight days.

After one to ten days of circumcision surgery in Kolkata, the penis should be completely healed.

Are There Any Problems That Can Occur After Circumcision?

Complications after circumcision are rare. However, contact your child’s physician immediately in case –

How Parents Should Care For Their Son’s Circumcised Penis?

It is important to keep the area as clean as possible after circumcision. Clean gently with warm water; do not use baby wipes. If necessary, soapy water can be used.

If there is a dressing on the incision, replace it (with petroleum jelly) whenever a diaper is changed for the first two days.

Apply petroleum jelly to the penis or the front of the diaper until the penis has healed, even after the dressing is no longer necessary. This can prevent discomfort caused by the penis rubbing against or adhering to the diaper.

Seven to ten days are required for a circumcised penis to heal. Initially, the tip may appear slightly swollen and red, and there may be a trace of blood on the diaper.

After a few days, you may also notice a slight yellow discharge or crust. This is a normal part of the healing process.

If you observe any of the following symptoms after your son’s circumcision surgery in Kolkata, contact your doctor immediately: